I recently learned that I was not selected to write a beverage column for a local publication. However, as the “close runner-up,” I wanted to post the sample column, and include a few photos, for my blog readers. It’s also a great tie in for my upcoming library program about last year’s vacations to Oregon and Asheville, North Carolina. Come to the Fairhope Public Library at 2 PM, on January 29th to see pictures, hear stories, and learn about my airbnb experience. Although we will not be doing any Day Drinking, I’ll be giving away some souvenirs during and after the program.

2014: The Year of Magical Drinking

On Christmas, I was pouring tastes and offering pulls from my bottle of Lucky Buddha, a beer my brother Mark brought for the festivities.

As I took a sip of “Enlightened Beer,” I pondered. Then I began to count my 2014 blessings. It really was a year of magical drinking. 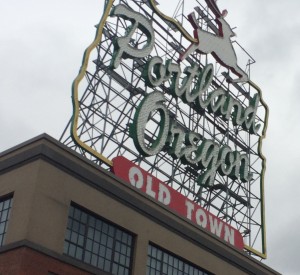 Ten days of vacation in a walkable, bike-able city like Portland is pure bliss. And that’s before we even had anything to drink. Portland’s called Beervana for a reason. We were within walking distance, less than a mile, to about ten breweries/tap rooms, six distilleries and a few micro coffee roasters. I’ve written about Oregon before, but here are a few places not to miss.

Base Camp has great beer and the best water dispenser. The water line empties into a keg that’s hanging on the wall and you tap your own water.

Cascade Brewing is a sours only brewery. These tart barrel aged beers use wild yeasts from the air, or left behind in aging barrels to help ferment the beer. The wild yeasts are unpredictable, and time consuming as many sours can take up to two years from barrel to bottle. 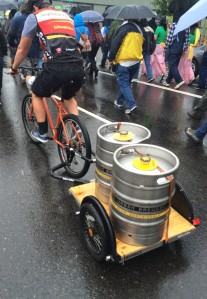 So many beers, so little space. Here’s my list of favorites with brewery, style, and a few choice words.

Boulder Brewing, Shake, Chocolate Porter, You can taste the cacao.

21st Amendment Brewery, Hell or High Watermelon, Wheat, a picnic in a glass.

While sitting with some people we met during the festival, drinking a Laurelwood Pale Pony India Session Ale, we witnessed a Portlandian moment. A man in a Darth Vader helmet was riding a unicycle and playing the bagpipes. He’s obviously doing his part to “Keep Portland Weird.”

As we were leaving someone was handing out samples of hop soda. The Proper Soda Company makes a crisp, refreshing, and thirst-quenching soda, and it’s made with cane sugar and hop extracts.

Where would a congenital below-knee amputee like me, go to get coffee around Portland? Why Stumptown, of course.

It was summer so I ordered an iced coffee, but this is Portland, where they’ve melded coffee and beer brewing techniques together. Stumptown’s cold brewed iced coffee is infused with nitrogen.

They also fill growlers of this nitrified coffee to take home. (Read my recent post on Fairhope Roasting here.)

Susan and I left the city for the valley and stopped at the Sokol Blosser Winery. After sampling some very fine wines, bought a bottle of the 2013 Willamette Valley Pinot Gris, made in the Alsatian style with rich and spicy tropical fruits with hints of fig and grapefruit. We intended to take it home but on July 26, after a day of whale sightings and lighthouse climbing, we opened it on our balcony and watched the sun sink into the Pacific. 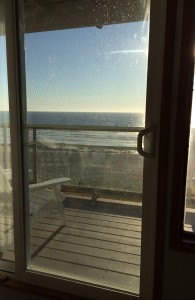 Take a detour to Rogue Farms. There’s something special about seeing the hops budding and being near the ingredients that make it into my pint glass.

Henry the VIII deemed hops “a wicked and pernicious weed,” when brewers began adding it to beer. The beers at Wicked Weed are amazing, full of hops and yet delicate as flowers. They have managed to fuse bitter hops with the grace of grains to create a complex medley of balanced brews. From floral aromas and drinkable session IPAs like “Feral,” to their dank, hoppy beast, “Freak of Nature,” a double IPA, the beers at Wicked Weed do not disappoint.

Do you know how fabulous it is to find a list of craft beers on tap at a concert venue? Asheville lives up to it’s nickname, Beer City, USA. The Green Man Porter was delicious, especially while singing and dancing, (well grooving) along to “Time of the Season,” by The Zombies, at The Orange Peel.

On a trip to Birmingham (for the Y’all Connect Social Media Conference) I had time to visit the good people, at Good People Brewing. I sat at the bar and enjoyed my first Oatmeal Stout.

What’s better than a brewery and tap room? A brewery and tap room with the best BBQ two doors down. That along with some fine beers is what Avondale Brewing has got going on, especially with their saison. We ordered up some Saw’s Soul Kitchen and brought it back to the taproom. Trunks Up!

My sister Laurie was in town around the Fourth of July. Six of us piled into a Suburban to watch the Blue Angels air show over Pensacola Beach. I only had my five toes in the sand, but it was a hot day! For a tiny moment, a grain of sand in the hourglass of eternity, a Pepsi “made with real sugar” quenched my thirst.

As the winning bidder for an Alabama Coastal Foundation Fundraiser, a group of us had a personal tour of Fairhope Brewing (celebrating their 2nd anniversary this weekend) from Head Brewer Dan Murphy. We were an inquisitive bunch and I seem to remember him saying something along the lines of it being one of the better tours he had given at the brewery. Dan walked us through the naming of each beer while talking up the tasting profiles of each ale. He gave us the scoop when he announced that the brewery was expanding their production and then showed us what was in store for the future. He had obtained several wine barrels to begin experimenting with sours.

The bottle of Lucky Buddha was returned to me, alas, empty.

Never one to let his little brother down, my brother Steve went to the fridge and poured me a glass of Blue Pants Chocolate Oatmeal Porter.

I can’t wait to sip what the future holds.