A coworker gave me that quote last week.

“Mom, why do people work here?” The 8-year old girl asked as she was walking out of youth services and past the reference desk. The musings of a child, how precious. And curious, like me, but she didn’t ask me.

Mom said, “They need someone to shelve the books and stuff.” What did she say? Hufflepuff, Pufnstuf, Fluff? Here’s some of the “stuff” from just a busy few minutes yesterday morning.

So I had just walked an 89-year-old woman through getting ebooks downloaded to her Overdrive App. In between that I was helping a patron put a hold on Saving Sophie, and simultaneously telling another person how to log in to one of our computers with their library card to surf the web, and then I had a group of eight Latter Day Saints Mission women sign up to use our computer lab. Many of the young women were visiting from their neighboring mission locations, including Atmore and Mobile. I felt like the Fairhope ambassador, which I love doing. While all this was going on, I had a patron patiently waiting to hand me something for helping him in the past. I shortchanged my attention to him, because I had too many other things going on. He wondered off, but I found this later.

When The Girl with the Pearl Question walked by, I was in the middle of creating a sign for the Frances Durham Poetry collection, and noted her role in founding The Pensters, a local writing group that began at the Fairhope Public Library in 1965. While in the midst of that I helped a man in a wheelchair using a computer to print for the first time using our printing station.

Later on, I found the books below. 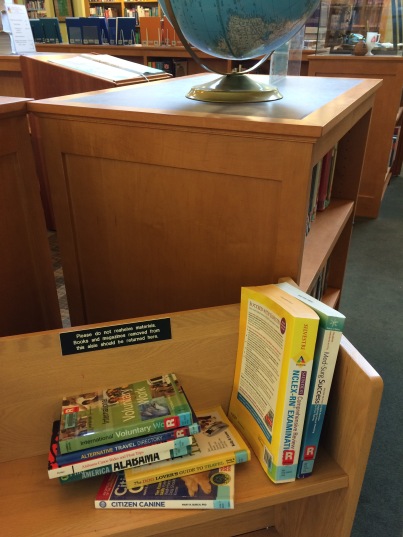 As it turns out, I’m not just the eyes and ears of the library. As usual, mom was right. I do shelve books and stuff.

2 thoughts on “Why Do People Work at the Library?”