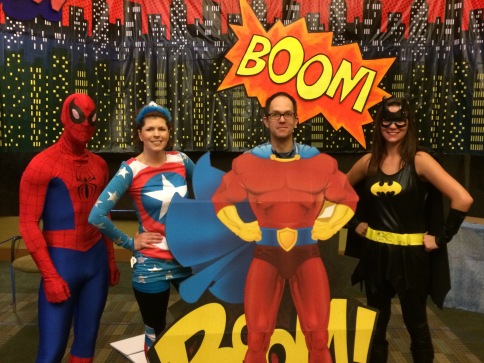 I posted a photo similar to this one on Facebook. It was from the wrap-up party for the Summer Reading Program. Lorraine, a fellow blogger, friend, and local lunch lady, saw the picture on Facebook and asked what we were doing with the stuff. Lorraine posted that the school is having a superhero theme this year and was anxious to get her hands on any of the decorations we were willing to part with or share. I told her the decorations were mostly down, but I emailed Lorraine my coworkers email and work number.

She contacted Julia, our Youth Services Assistant (She’s Captain America, next to Spider-Man, me, and Batgirl, co-worker Rose). Lickety split, a team arrives to take down the decorations.

This is why I love social media. It connects people around the globe, and down the street. I recently signed a petition to Save Prosthetics that garnered 100,000 signatures that will have federal policy makers take a second look at Medicare prosthetic coverage. While there are over 4 million amputees in the United States there is a sense of satisfaction knowing that our voices are being heard. As cool as it is connecting people, ideas, and causes from around the world, it’s more important to connect people in our own communities.

I am proud to be a small part of the conduit that connecting Fairhope Public Library and Fairhope Elementary. Appreciative, the cafeteria staff sent us some photos of how they transformed their cafeteria space. Check ‘em out!

Lorraine and I are connected because we met last year at a Gulf Coast Bloggers meeting. Last month, I hired her daughter Megan to create a logo for Stump the Librarian. Megan is an extremely talented graphic and animation artist.

I’ve included this early draft to show you the collaboration process, which I thoroughly enjoyed. We used email, the world’s first social media, (apologies to A. G. Bell, and G. Marconi) to exchange thoughts and ideas.

Megan was easy to work with and was great at incorporating my ideas and sketches into vivid graphics and text. I hope you love the new logo as much as I do! 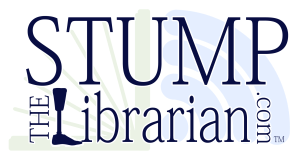 Our group of bloggers attended the Social Media Conference earlier this week on the Baldwin County campus of the University of South Alabama.

After the conference, the Southern Bloggers Jubilee party sat outside for lunch at Panini Pete’s. Karyn got an email from Cal Tech’s swim coach about her son attending college on the west coast.

“Do you know who else went there?” I asked from across two tables.

A couple days later, I emailed Karyn. It turns out Cal State, not Cal Poly had emailed about her son. Can you guess what song’s stuck in my head?

Dare to be Stupid. It’s so easy now.

Chuck Klosterman said. “Nothing is ever in and of itself.” We are constantly looking for connections. That’s why I’ve decided that everything that happened during and after the conference can be summed up with two words. Weird Al.

I’ve been to lots of sessions led by Angela, the University of South Alabama’s Baldwin County Librarian. She does a great job of presenting and hosting. In fact, she’s Like a Surgeon. Using her scalpel, forceps, and retractors she brought a surgical team of librarians and a marketing company founder to the OR.

In “Classical Rhetoric for the Digital Age,” Burgess defined rhetoric and talked about Logos, Ethos, and Pathos. Obviously that triangle is the last one I think about when I post a photo of my grinning, glasses faced self in a cardboard cutout of Drew Daywalt’s book The Days the Crayon Quit. I was inspired by Weird Al, who has his own picture books, When I Grow Up, and My New Teacher and Me. (Also relevant for woman in the audience writing children’s books.) As a rhetorician, John said I should think about whether Facebook, blog, and Instagram posts project a persuasive message. Being a skeptical librarian, I probably don’t need to worry too much, since I only have 5 followers on Instagram and only 12 people like my Facebook post.

Gump came to mind too, and not because it rhymes with stump, and leaves me a leg up on no legs, Lt. Dan. Burgess is an instructor at Alabama, and Winston Groom, the author of Forrest Gump, lives down the road in Point Clear. I remembered another Gump-ism and as it turns out, a circular argument: stupid is as stupid does. My wife Susan is always telling her second graders that you can’t use the word you are defining in the definition. I liked Burgess. He reminded me of a younger Dr. Demento, except Burgess had a red beard any Portlandian hipster would be proud to groom. He was no pirate though, more White and Nerdy, like me. Maybe next year we can bowl with the gangstas.

Angela built up such an introduction to Shepard that I was nervous that she wouldn’t deliver. She didn’t disappoint. Shepard had lots of useful information on Instagram and the most interactive audience session of the conference. For her efforts, she gets I Perform This Way because some of us went Gaga for her content and delivery on all things Instagram. Even better, I never imagined or saw photos of Shepard draped in a shawl of raw red meat. She said yoga so many times, I began to sing Y.O.D.A Yoda.Ya ya ya ya ya Yoda. I’m following Yoda on Instagram now. #yoda.

Anyone who follows Shepard has to be comfortable in her own skin. Paula was, even as she was pointing out all the apps for the Center for Disease Control and Prevention, and the game called Solve the Outbreak. Webb’s focus was on government apps, including Smithsonian, which has an app called MEanderthal.

“I’ll have to download that app in the man cave,” I said, which got a good laugh, and reminded me of Bedrock Anthem. Yabba dabba dabba doo now. That’s Flintstone for post something will ya! Preferably, with your phone in one hand and your baby elephant vacuum cleaner in the other.

There’s even an app for Fat. When I walk out to get the mail (U.S. Postal Service), it measures on the Richter scale (FEMA). Down at the beach (Healthy Swimming), I’m a lucky man; I’m the only one who gets a tan (UV Index).

I loved how Hoffman described social media marketing as the “Million-legged Beast.” Where does that leave me? As the one-legged guy in an ass kicking contest, that’s where. Hoffman’s the marketing director of SixDegrees (not from Kevin Bacon), but has a few peeves about email. The fact that she doesn’t read spam, leads me to believe that for Hoffman, It’s all about the Pentiums, and it’s important to stay current. Your laptop is a month old, Well, that’s great, if you could use it as a, paperweight.

Our time is valuable, so Hoffman had some sage advice for us: Stop Forwarding that Crap to Me. If you do send or forward mail, companies with IT hackers, code crackers are blocking all your Mail Chimp and PicMonkey business.

Glasses, Guy, Glasses Guy, or Marcus was the social media guru turned heckler, and chamber of commerce blasphemer. However, Mr. Bluefish had lots of relevant comments and suggestions, just like CNR, (Charles Nelson Riley). Most important for the guys in attendance was his information about the men’s version of Instagram’s @whatsinmybag. @everydaycarry is what are you carrying for dudes. Glasses Guy reached into his pocket and pulled out a Lego Stars Wars character keychain. I think it was a stormtrooper, so let me just say, The Saga Continues.

During the Southern Bloggers Jubilee feed session, AKA Eat It, we rehashed the conference. None of our bloggers were living in an Amish Paradise, acting technologically impaired.

We all got the message at the conference that if you “do” social media, you should never be Inactive.

And we always own up to and immediately correct our Word Crimes. Most Bloggers could care less, which means we do care.

In fact, we love social media so much we’ve got the chutzpah, nay the Gump-tion to have our own social media and blogging conference. It’s still early on, and I’m optimistic that we have a better shot of holding a conference than Weird Al headlining halftime at Super Bowl XLIX. I definitely don’t want to be his Foil.

Over the Transom
Spalding MFA Alumni