I never should have checked the book out. Smoke Gets In Your Eyes: Other Lessons from the Crematory, by Caitlin Doughty is about death. There are lessons to be learned from this book and yet it is graphically detailed and not for the faint of heart. Doughty, in offering an insider’s look into death and funeral rites in America, attempts to “put the ‘fun’ back in funeral.” A few days after I started reading the book, someone died.

He was the godfather of the new, now nearly eight-year-old, Fairhope Public Library. My place of employment would not exist today without Hollis and his wife Teko’s efforts. I did not know Hollis well, but we always exchanged hellos and a little small talk whenever our paths crossed. I’m pleased to be a public servant in the house of books that Hollis built. I will also remember the couple whenever I ride on the Eastern Shore Trail, a 32 mile pedestrian and bike path the couple advocated for and funded.

In a rather winding yet conversational way, Doughty uses pornography to introduce the more serious subject of dealing with death as a child. Our first experience with death is often our childhood pet. As a child Doughty witnessed a little girl fall to her death in a mall which profoundly changed how she dealt with death. Weaving childhood memories into a book about funerals is not easy, but Doughty insists that we simply cannot ignore death. Doughty tells us the way to figure out your porn-star name is to combine the name of your first childhood pet with the name of the street you grew up on. Doughty’s porn-star name is Superfly Punalei and mine is Smokey Nanumet.

I justified his death, saying, ‘well, he was 98.’ Jerry was a model library patron. He was a seeker of knowledge, a spry optimist, strategically sharp, ethical, faithful, and philosophical. Mere Google searches did not produce answers to Jerry’s questions. He made you think, and learn, and form your own opinions on a subject. In short, he sought information, I researched it for him and gave him the answer. In the process it taught me something about myself. Jerry was the most self-aware person I knew. More importantly, he insisted others be the same, especially librarians.

Jerry just happened to die on Halloween, Megan McRae’s birthday, my dad’s day of death, and Hollis Wiseman’s funeral. On Halloween, I was reading Doughty’s book when she’s in the crematory pressing the button on the retort to get the fire started and the body moving toward cremation. It was comforting to learn that anyone can request to witness a cremation. Family and friends gather, and someone, most likely the family member who presses every button in the toy store, would say goodbye with the press of a red button.

Media Vita In Morte Sumus, In the Midst of Life We Are in Death

‘Okay, it’s just a coincidence’ I told myself of the latest patron passing, and kept on reading. I learned about what goes on behind the black curtain. Not in Oz, where the wizard grants wishes, but in funeral homes throughout America. Many are owned by Service Corporation International. It was Jessica Mitford who first wrote about dying, the funeral industry, and cremation in The American Way of Death. Doughty blames and credits the 1962 bestseller for taking away the corpses from funerals.

As Men, We Are All Equal in the Presence of Death. Publilius Syrus

During the visitation for Jerry, I met his family including Matt, Chris, Becky and a few of his friends. Reverend Thack Dyson gave the service for Jerry at St. Paul’s Episcopal Church in Daphne.

Next to the guest book, were copies of a poem, “One-Hoss Shay,” by Oliver Wendell Holmes.

This is the handwritten note from his family. 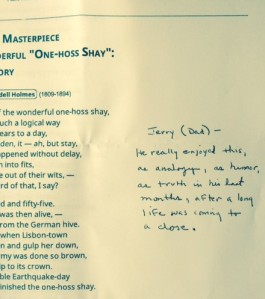 Below is where the poem turns for me.

In fact, there’s nothing that keeps its youth,

So far as I know, but a tree and truth.

(This is a moral that runs at large;

Charles too, loved the library, and volunteered with the reference department teaching a variety of classes. Charles’ memorial service, “Requiem for an Old Mule,” was held at the library. Many friends and family spoke fondly of Charles, whose family called him “Chock.” There is some tradition of funerals at the Fairhope Library. Marie Howland, founder of the Fairhope Library died in 1921. Howland’s service was held in the old library on Magnolia and Summit and Fairhope’s founding father E.B. Gaston stood over the body and delivered the eulogy.

During Charles’ service, P.T. Paul, a local poet, read William Faulkner’s Nobel Prize acceptance speech to the many friends and family in attendance. P.T. said she and Charles believed that “everything is cyclical.” P.T. read a poem by Charles that reflected this belief. His daughter reminded us, a somber group, that her dad was a practical joker too.

Death Should be Known. Caitlin Doughty

My mom always says bad news comes in threes, like deaths, strikes in baseball, or Stooges. Having reached that number, I was comforted that patrons would stop dying, so I kept on reading the book.

This was around the time in the book that Doughty was honing her black humor skills among her coworkers. There was the story of “the leg in the cooler.” Apparently a woman, suffering from diabetes had her leg amputated and wanted it cremated. “A pre-cremation,” Doughty calls it. Having a leg cremated sounds downright normal when you compare it to my previous post about the guy who had his leg preserved, made into a lamp, and then tried to sell it on eBay.

Doughty is doing the “Dance of the Macabre” in her memoir, but she emphasizes both the cultural and personal connection to death, “as a mental physical, and emotional process,” that should be, “respected and feared for what it is.”

I never met her personally. I only know her daughter, my brother Mark’s girlfriend Kim. The obituary Kim wrote was very personal and captured LaSonia’s essence. During the visitation on Tuesday, I sat in the pew quietly for a few moments thinking about Kim and her siblings, and how losing the matriarch often means losing the family center.

“No,” I said, “Second,” though it had been nearly a decade since the last visit. This time, I noticed that we came into Bayou La Batre on Wintzell Ave.

St. Margaret’s Church is a beautiful brick and stained glass Catholic church. I glanced at the open casket. I decided I didn’t need to get any closer and admired the flowers, especially the sunflowers, regretting that I did not wear my sunflower tie fearing it would be too “upbeat” for a visitation.

This was the only body at all the services I attended. Sadly, Doughty pointed out that even dying is all online now. Yes, just like applying for a job, or renewing your auto tags, you can carry out the last wishes of a person with an internet connection and a credit card. Corpses are now optional.

The Meaning of Life is That it Ends. Franz Kafka

I finished reading the book, but I didn’t check it back in. The book was grotesque, dark, and funny, in a creepy and informative way. Doughty lets the light in to the dark corners of death. The places where no one dead or alive wants to go. So, I put the book down. For a while. I picked it back up and started rereading passages. Was I obsessed with death? Not obsessed, but interested in learning about what happens to our bodies after we are cold. I was planning on writing a blog about the book, so I renewed it.

“Human Beings are not nature’s favorites. We are merely one of a multitude of species upon which nature indiscriminately exerts its force.” Camille Paglia

In between the memorial services for Jerry and Charles early Saturday afternoon, I went to Knoll Park. I walked the small hill up to the top where the bay comes into view through a shadow box of Long Leaf Pine tree trunks. I thought about these two men.

Whenever I need to think, or reflect, I head outdoors. There is something comforting to me of being outside during a loss, or rather, a remembering.

I see the purple flower. I call it a flower, but it could be a weed. It provides color in a brown and gray landscape. It feels fresh, alive, and youthful. I don’t feel that way on this day. Beneath that flower is a layer of decomposition and decay. I find myself walking over decay and wonder where my remains should rest. On a mantle, in the forest, or scattered at sea. At one time I wanted them scattered on the bluff of my old back yard in Falmouth, overlooking the cranberry bogs and Mill Pond. I live here now, and there’s no going back. I have no doubt that while wandering through the park, I was walking in Marie Howland’s footsteps.

When you first hear bad news it is always a shock. I’m still bewildered that my coworker of seven years died on Saturday. We often kiddingly called Carole “The Queen,” because she had style. She also liked to talk about a town in Scotland that sounded a lot like a swear. “All aboard for Muckle Flugga,” she’d say with her Scottish tongue, firmly planted in her cheek. it’s hard to believe that the Queen’s gone to the great library in the sky. Carole is now with the King of Kings.

It Won’t Help to Hear What I Think About Death. Carl Jung

I went to the library today and returned Smoke Gets in Your Eyes. Not surprisingly, no one had a hold for a book about a mortician in a funeral home trying to change how we think about death in America. As I went through the library, we librarians held onto each other. I welled up a couple of times, but managed to choke down a few sobs. I learned that there will be a service for Carole Thursday at 4 PM at St. Paul’s in Daphne. The library will close at 3 PM so we can all attend the service.

Just like every book we read heightens our literary sensibilities, memorial services should heighten our awareness of our own mortality. I will be there. To think, meditate, and wonder what her death means to her family, her fellow librarians, and her many friends. How will her death shape my future. If you do not learn anything from reading books or death, are you really living? Doughty’s book uses humor to coax people not just into thinking about death, but in doing some actual planning to ensure what she calls a “good death.” (If you subscribe to this humor theory, please leave your porn-star name in the comments.)

I already know this service will be different than the others. I knew Carole. She was more than a patron, she was a trusted friend. I’m thankful that I’ll be surrounded, comforted, and consoled by my library family on Thursday. In between all the tears, sniffles, and sadness, I hope as we remember Carole over the next few days we can share a few funny memories too.