As a first time attendee of ALA’s Annual Conference, here are some moments, now memories from my experience. 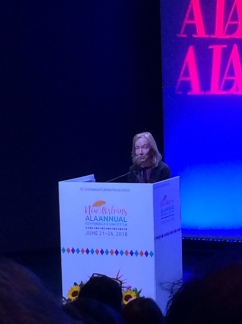 Sue and I had wonderful and close seats to hear fascinating, new, and entertaining insights from America’s foremost presidential historian.

Kearns Goodwin began with her love of libraries, and how they were, even as a child, “a window to the world.”

She has spent the last 50 years with four presidents, who she admiringly refers to as “my guys.”

What I found fascinating is that all four of these greats she said, “were changed by an emotional or physical disability.” Lincoln suffered an early stroke, TR’s mother and wife passed within days of one another, FDR was stricken with polio, and LBJ had a heart attack.

Heard a new word from several different speakers at the convention.

Librarian-y: duties or things a librarian does.

Example from the session on “High Impact Librarianship.”

“I didn’t include creating a Libguide for my students in my portion of the research because that’s librarian-y.”

What’s a libguide? It’s a subject guides that pulls together all types of information about a particular subject or course of study. Click here to see the Libguide I created about the history of Fairhope.

What Every Librarian Should know about Young News Consumers

For those of us with a journalism background the news is not good. In a survey of 4,500 high school and college students from around the country, 82% think memes are news. They also get a lot of news from The Onion. Of course, credible sources are listed like CNN, The New York Times, The Guardian and others according to Alison Head, of Project Information Literacy, which is leading the study. Early results reveal not only how the students get the news but also how the news finds them. They find news through social media sites like Twitter, Facebook, Instagram, and Youtube and even Snapchat. “Facebook is dying,” in Head’s survey population, though it’s hard to believe since Zuckerberg just bounced Warren Buffet as the third richest person in America. In a bit of good news, Head explained that more than half of the news students get comes from discussion (actual face to face) with peers. The full study is out October 16.

She and I have something in common. We keep a journal. And more importantly, we encourage others to keep a journal. It’s how she was able to write her memoir, In Pieces, (September 18) Field went back to her journals after her mother died. “To make me go places I didn’t want to go,” she said, was the motivation for her book, and that her journals provided a “string of stories to tell.”

She had her first theatrical role  at 12 and she was hooked. When she was onstage, Field saw the “fireflies on the edges of my eyes.”

As a member of the Actor’s Studio she learned the “Craft of auditions,” Of her early Hollywood experience, and for her role as Sybil, she joked, “I was hired over everyone’s dead body.”

A pivotal role, and one she writes about in the book, is Carrie AKA “Frog,” in the action comedy Smokey and the Bandit. 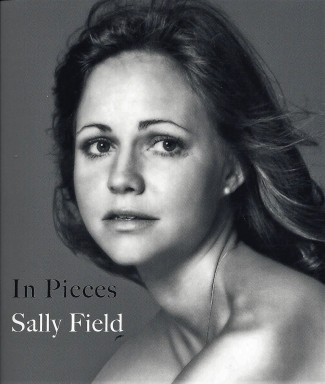 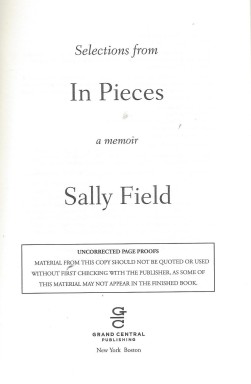 Hayden told a powerful story about walking down a row with an archivist and wandered into the Frederick Douglass Collection. With TLC and the approval of every move by the archivist, Hayden finds and holds a letter about Lincoln. It’s about Lincoln’s death and Hayden could see, feel, and touch the deep, angry impressions Douglass left on the page upon hearing that negroes would not be able to attend the viewing of Lincoln’s body.

America’s librarian is also building inroads to legislators with the Congressional Book Club. In a closed meeting, lawmakers go to the Library of Congress to listen and talk with prominent authors.

The most recent book club was a discussion with historian Jon Meacham about his latest book, The Soul of America: The Battle for Our Better Angels.

For many lawmakers, Hayden said, “it’s their first time in the LOC.” It provides a chance for her to talk with them in a private setting and explain what the library is, what it does, and how it serves the nation.

She also makes it a point to meet with legislators at libraries in their districts (Many lawmakers are also in their local libraries for the first time). This way she says, “I can stress the importance of local libraries.”

Her term for volunteers is endearing. “Citizen Historians,” she said are working with children to help them read historic documents written in cursive.

Sparks, pinch me moments, the interconnected of things, from experience to research, and collaboration, to the magic of a new way, practical or creative, of doing things was flowing through the ALA, and will continue to flow through me for years to come.

Parkway Bakery and Tavern in Mid-City NOLA is a must for a Po’ Boy!

Our collection includes 65 books for Sue’s classroom library, most signed by the author, “To Mrs. Samry’s Second Grade Class.”

News the missing legged can use

The circulation department staff told me about a new movie I need to see.

Mary said, “So I heard The Rock is an amputee in his new movie.”

“Really,” I said, totally surprised by this.

“I heard he takes off his leg and uses it as a weapon,” Mary added.

“Yeah,” Melissa chimed in, “he also uses the leg for a zipline getaway.”

“Whoa, that sounds too cool. I’ve seen a preview of it but didn’t know he played an amputee, what’s the name of it again?”

A recent article in the newspaper talked about an archeology discovery at the Manassas Battlefield National Park in Virginia. A national park ranger and archeologist discovered a mass grave where surgeons buried amputated limbs. It’s strange how these limb stories find me. Sue heard about the limb pit story from another shopper at Big Lots. 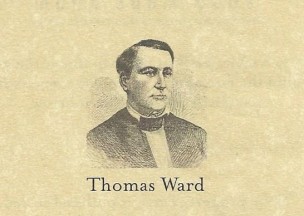 Amputee stories even find me on vacation. I was in the Capital Visitor’s Center in Austin, Texas when I discovered the name Thomas William Ward in one of the exhibits. Ward immigrated to America from Ireland in 1828. He worked construction in New Orleans and helped organize the New Orleans Greys, a volunteer militia.

In December 1835, the Greys volunteered to fight for Texas Independence. At the siege of Bexar, a cannonball smashed his right leg, and required immediate amputation.

In a bit of Irish luck, he missed the fight, some might say slaughter, at The Alamo in February and March, 1836. Don’t be confused, as I was thinking he fought and died at The Alamo, that was William B. Ward. Thomas Ward was in New Orleans being fitted with a peg, and serving as a recruiter. In May, he return to military service after Texas had gained independence.

Ward was elected Mayor of Austin and served as commissioner of the General Land Office. Read more about Ward here.

The General Land Office was completed in 1857. It’s now the Capital Visitor’s Center and that’s where I discovered Ward.

The saying that everything in bigger in Texas is true for their libraries too. The Austin Public Library is in the background, just past the treeline. It has an amazing Hogwarts-like staircase, a covered outdoor rooftop area for patrons, and a technology petting zoo. Had such a great time, here’s a list, in random order, of highlights: The bats, Home Slice, Eastciders, The Saxon Pub, Barton Springs Bike Rental, The Capital, History of Texas, The Alamo, LBJ Museum, The Salt Lick, Fredericksburg, Luckenbach, Uncle Billy’s Brewery and Live Music Everyday.