Susan and I took a trip with the Baldwin Senior Travelers to North Alabama last weekend. What a great experience it was and how delightful people were to us, especially when they asked, “Are you old enough to belong to this group?”

On Saturday morning, as we began boarding the bus in Rocket City to visit the U.S. Space and Rocket Center, our tour guide Jim asked how I’d lost my leg.

I went to my go to answer of late saying, “I never had the whole thing, I was born without my right foot.”

“Oh, well my dad lost his leg in Korea so I’ve been around prosthetics all my life.” Jim’s father always complained about the fit. The one improvement in my lifetime that radically changed prosthetics for the better was the development of the silicone gel liner, the interface between my stump and the socket. It is truly amazing.

Susan’s dad John never served in Korea, but he was part of the war effort. In 1958 his unit delivered the Redstone Missile to Germany. The Redstone was the first missile capable of carrying a nuclear warhead that could be launched in the field. We went on the Huntsville trip to learn more about the Redstone, and John’s role in the Army.

Of course, Rocket City has next to nothing on information about missiles, war, or nuclear proliferation. It’s for families! So they promote Space Camp instead. While I didn’t go to Space Camp, follow the link to watch my ride on the Space Shot.

We didn’t have to go to Huntsville to learn about Korea. That morning we woke to the news that North Korea had successfully tested a nuclear warhead missile, technology we developed during John and Jim’s father’s war days.

This trip took place just a few days after our library book club read Almighty: Courage, Resistance and Existential Peril in the Nuclear Age, by Dan Zak. The book is extremely well-written and traces the history of our nuclear arms race through the biographies of three protesters who were arrested at Y-12 National Security Complex (AKA The Fort Knox of Uranium) in Oak Ridge, Tennessee in 2012.

At book club, our 9 attendees unanimously agreed that the protesters were peaceful, nonviolent protesters. We also agree it’s far too easy to break into the country’s largest plutonium processing facility, which costs an average of $300 million to operate per year. It turns out all these folks would have been welcome on our tour bus, as the average age among them was 67. All three, including the nun, Sister Megan, reached Y-12 with a pair of bolt cutters and the belief they were on a mission from God. 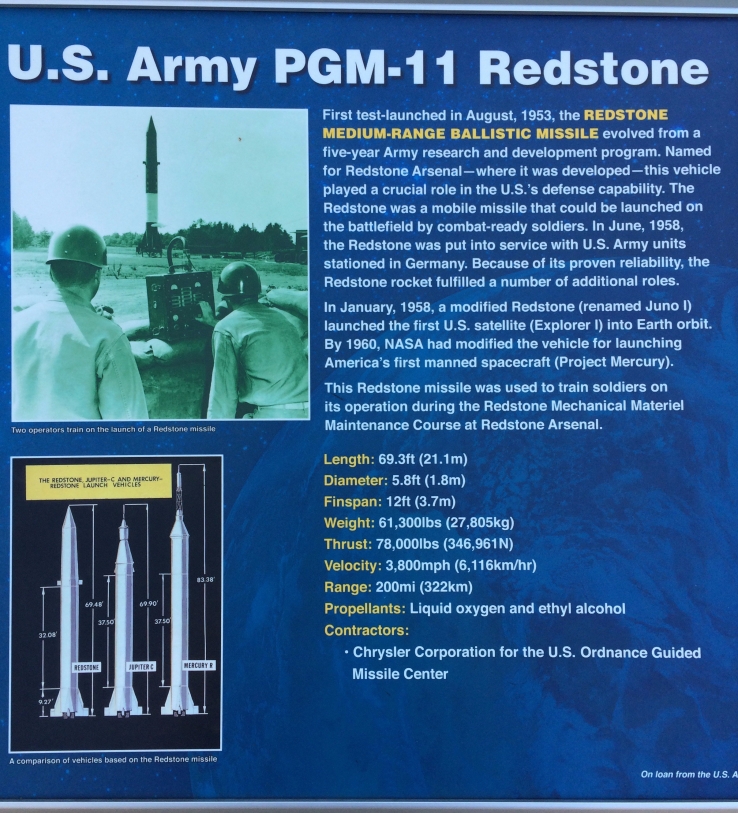 Dean was our bus tour guide for our NASA experience on Redstone Arsenal military base. 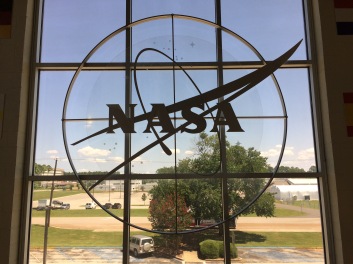 We stopped at the Redstone Missile Test Stand, now a historic landmark. 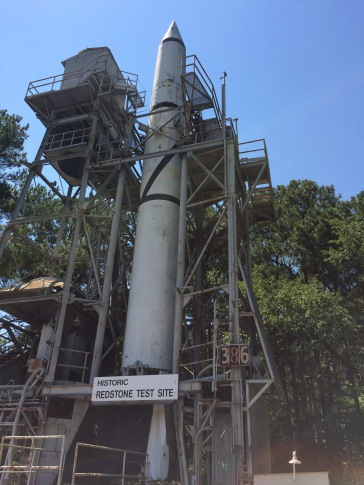 We stopped at NASA’s Payload Operation Center, where people communicate daily with astronauts about ongoing research at the International Space Station. One thing Dean pointed out seemed very telling. All of our astronauts are required to learn Russian. However, Russians are not required nor do they speak English, which is supposed to be the primary language on the ISS. Fun Fact: Our astronauts used a 3-D printer in space to repair…something!

Finally, we learned about Orion, the new spacecraft that will circle the moon in 2022 and then go on a three year mission to Mars in the late 2020s or early 2030s.

It has not been decided what fuel will be used to get to Mars. Get this, according to Dean, politicians and NASA officials have concerns about using nuclear energy in space, but somehow having 32,000 nuclear warheads at the ready in the US alone is okay. What? Kind of makes me wonder what planet they’re from, or where they plan on going if we ever use these weapons. Orion only has room for 6, but only four astronauts will be cruising by the moon. I imagine it’s the world of difference, like first class versus coach. They could go to 51 Pegasi b, the first planet identified in another galaxy.

On our way back to the Gulf Coast we stopped at Ave Maria Grotto in Cullman, Alabama.

We had lunch in the school cafeteria, and while we waited I stood outside in the shade under a buckeye tree. I don’t think I’d ever seen a buckeye tree, and one of my fellow travelers, Kim, originally from PA, said she didn’t know they grew this far south.

In his spare time, Brother Joseph Zoetti, a Benedictine monk at St. Bernard Abbey, built shrines out of local materials and things people sent him in the mail. I’m calling him the Founding Brother of Roadside America.

As I stood among the tall pines, the hydrangea and the buckeye, I noticed a three letter Latin word, PAX, in Brother Joe’s art. On the hillside in Cullman while walking with Susan, I enjoyed  visiting the St. Bernard Abbey Church, and learning about Brother Joe’s creative life. What I wish for new friends, neighbors, and nations is the time to think, reflect, and value these quiet moments of PEACE. 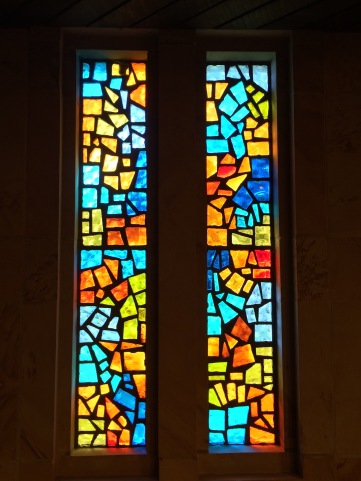 2 thoughts on “Rockets Versus Missiles”