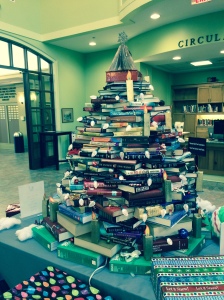 Building the book tree at the Fairhope Public Library was a team effort. Cheers to Rosalie, our nonfiction book club member, for suggesting the contest idea to us during our discussion of This Town. Guess the number of items in the tree the next time you visit the library. Even Cheryl the Builder doesn’t know how many items were used. I’ll be counting them after the new year, and the winner will be announced January 5. The winner picks one popular title that was used in the book tree.

The 1983 movie, A Christmas Story, is based on Jean Shepherd’s 1966 short story collection, In God We Trust, All Others Pay Cash. Shepherd helped write the screenplay and it is his voice narrating the movie.

The photo was inspired by Josh Sundquist and Leo Bonten. Sundquist’s Halloween photos are leg-endary and Bonten actually turned his amputated leg into a lamp. Last year, with the help of an app, I was Grinched.

2 thoughts on “How does an Amputee Librarian Celebrate the Holiday Season?”